The Wits' End Useless Ashtray Switchplate for the LATE 80 Series Land Cruiser was developed because lets face it, smoking sucks! Ok cigars are kinda cool, but I digress. The ashtray was previously used to collect spare change, hide blunts or store hot sauce packets. Some industrious individuals would cram in a modified Uniden 510 CB but seriously...who uses CB anymore? This is where the Useless Ashtray Switchplate (UAS) comes in. The switchplate mounts exactly where the ashtray used to be and is not only secured by the same mounting holes as the ashtray, but it also utilizes a "third leg" that is attached to bolt that goes right into the steel of the dash. This is critical because the addition of that extra leg just made the switchplate far more robust and able to carry more weight for tablets or other accessories.

The Useless Ashtray Switchplate is made from 6061 Aluminum and CNC machined then anodized in black. The Carling version of the switchplate allows for the addition of three Carling switches. The switchplate also is designed to work for both RHD and LHD late 80 Series Land Cruisers. Because of the narrowness of the ashtray only three switches can be used but since there is a little extra space leftover, two 1/4-20 threaded holes were added. These threaded holes can be used for mounting various accessories.

This switchplate is designed for the standard Carling L- or V-Series switches and will not work for the larger versions. Although only three of the four mounting holes are ever utilized, four screws and one nut will be shipped so that the fourth hole isn't empty. Also included are black oxide hardware so that you can pick between having zinc plated (silver) hardware or oxide (black) hardware.

For a huge selection of Carling switches please see: OTRATTW

Directions:
• Remove the ashtray and ashtray slide
• Remove the two screws that hold the ashtray in place
• Move ashtray light and harness out of the way (not used)
• Remove the screw found on the right hand side of the ashtray that is screwed into the inside of the dash and remove it
• Take the "third leg" and screw the third leg into the inside of the dash (do not tighten yet)
• Screw in the "handle" looking part into the old ashtray mounting holes using the new supplied hardware while making sure the "Wits' End" logo is facing right side up and just just hand tighten
• Using the supplied SHCS hardware (pick your color choice) then decide your switch plate orientation
• The top hole opposite the "third leg" gets the spare screw with the nut, install and tighten (this is just for looks)
• Attach the plate to the handle and align with the "third leg"
• Start with both sides of the "third leg" to tighten down then proceed with other hardware until the switchplate is square to the dash
• Install wiring and switches as needed 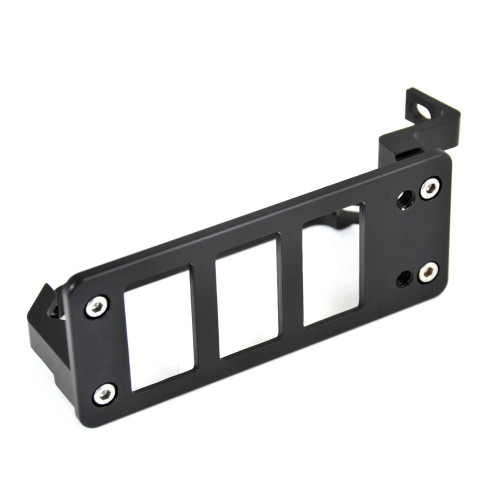