**NOTE: This covers the older DC power cord which were standard equipment with all ARB Fridge Freezers pre-April 2014.

**NOTE: Final product design may change as general usage and feedback are considered.

This upgraded DC power cable design came about trying to locate a replacement DC power cable locally. The cable got snagged by loose gear in the cargo area and it damaged the proprietary plug beyond repair. On top of this the standard 12v cigarette lighter plug was driving me nuts because of how finicky it was. Although ARB finally came up with their twist lock solution it still wasn't good enough.

This is where the Anderson SB50 plug comes into play. There was no confusing the plug with anything else and more people were adopting Anderson plugs into their overlanding vehicles. Best part was that the plug will NOT accidentally unplug itself regardless of the type of trail you are running. In only takes one trip on Death Valley washboard in 110deg temps, realizing hours later the plug fell out, before you look for a better solution.

The next issue I noticed with other folks, and their fridges mounted onto fridge slides, was the potential to getting the power cable snagged and then shorted out. Each person had either a spring or a bungy cord or a Velcro strap or anything they could find to keep the cable up high enough to not get caught. Add to that the amusing number of electrical tape fixes.

The Wits' End SB50 DC Power Plug looks to remedy these issue by first using the Anderson SB50 plug and then by replacing the standard wiring with a heavy-duty memory coil that is only 2ft collapsed but stretches to over 6ft when the fridge is pulled onto the slide. This is the upgrade you have been looking for! 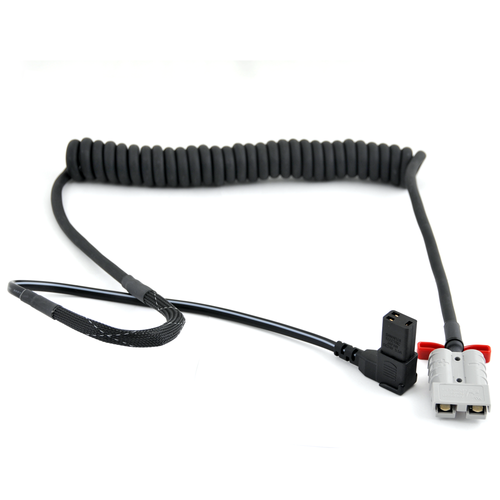