There is one thing that comes as a right of passage in owning an 80 Series and that is the rebuilding of our front knuckles. Generally speaking its not terribly technical, just messy and takes along time. Especially the first time.

But there can be hiccups along the way that you may not always plan for and generally you find out the hard way when your weekend project starts leaking within 5000 miles. Nothing breaks your heart more.

There are quite a few things that could go wrong but there is one that is often overlooked or just not considered and that is the inner seal that rides along the inner axle shaft that is connected to the birf. The OEM seal has been happily riding in its same spot for 100's of thousands of miles. The problem is that the rubber wiper part of the seal WILL inevitably wear a groove into the axle shaft. In time this means the gear oil will start to leak into the knuckle and basically work past the wiper seal and thus coat the backside of your knuckles in Toyota rustproofing.

There are three ways of fixing this:
• Purchase a new axle shaft from the dealer
• SpeediSleeve
• Under drive or better yet, OVERDRIVE the inner seal

Why overdrive the seal? Simple. The OEM inner seal as a given width. That width is actually narrower than the cavity its being tapped into. By overdriving the seal you are putting the seal's rubber wiper onto an UNTOUCHED portion of the axle shaft.

Currently the easiest method to install the seal is to use a seal driver which is a hockey puck shape of aluminum which is larger than the seal and basically gives you a perfectly flush seal to the knuckle ball. To underdrive it you just...don't drive it all the way in. The issue is making sure its perfectly straight. To overdrive it you are actually driving the seal further into the knuckle ball. But doing this can be nerve wracking because again...how do you know its going it straight AND is the socket you are using deforming the edges of the seal?

This is where the Overdrive Seal Installation Tool comes in. Not only does it capture the seal by having a boss that matches the seals inner diameter, but it also has a 2mm shoulder that is designed to fit INSIDE of the knuckle ball to overdrive the inner seal STRAIGHT by 2mm.

Very simple and reliable! Eventually this should be your seal driver tool of choice for the inner axle seal for any knuckle service. Brand new axle shaft? Still use it because you are starting the groove 2mm inboard. As you go thru repeated knuckle rebuilds the new seal location will eventually wear its new groove. Now switch back to a standard "flush" seal install and you are on a virgin spot on the axle shaft.

Can be used with any available seal driver handle or the Wits' End Seal Tool Handle and is used on the Inner Axle Seal, Front- 70/80 Series. 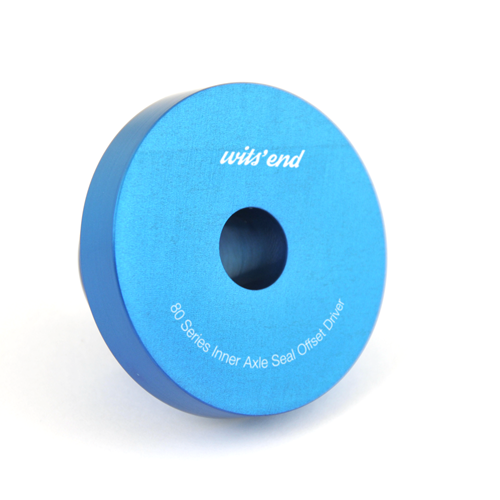